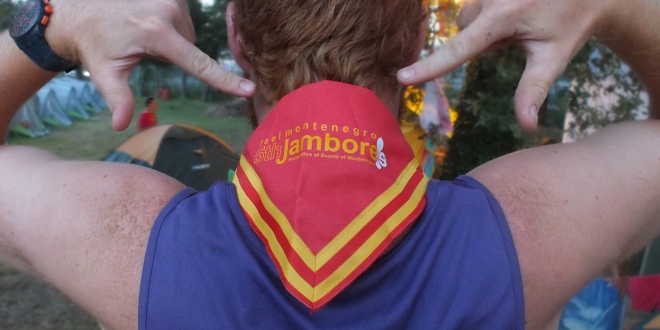 Sometimes being lazy has its benefits.

After a series of what I’m calling fortunate events I have found myself at the 5th Montenegro Scout Jamboree.

I won’t go into too much detail about the fortunate events but they involve a late start in the morning, an extra long lunch break and an early dinner on the beach. These events meant that as I passed out of the city of Bar I bumped into Sunny and her small group of scouts from Croatia. 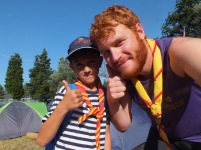 I have been in Scouts since I was about 5. First in Cubs, then Scouts and then in Explorers and Network (the 16+ and 18+ branches of Scouting). Despite the fact that I’ve spent most of the last few years away from London and my unit, and the fact that my Network group was recently disbanded, I have always, and will always, think of myself as a Scout. So I stopped to say hello and see what was going on. It turns out I had stumbled upon the Montenegro Scout Jamboree, and Sunny was kind enough to invite me to join, provided I got the approval of a few commanders first.

The camp was on a military base and so the first commander was of the military sort. He looked a lot like Robert De Niro, but scarier and with scars on his face (though my imagination may have added those afterwards, I’m not sure). He took my passport and examined it as the others explained who I was and what I was doing. After looking me up and down he gave a curt nod and walked away, keeping my passport.

The next commanders were a little less scary. The next one was a bright, young leader who asked me a few questions about my trip, told me off for not bringing my scouting scarf from home, and apologised for not having any spare camp ones to give me. The final commander was the host of our sub-camp, who we’ll call A. A is 13 (and a half) years old and he gave me a full and through interrogation when I arrived on his camp site, asking for details about my trip so far and my future plans. I think I got his approval, but it was hard to tell for sure. When the interrogation was over, however, he offered me food, approved of my sleeping spot and made sure I had everything I needed before marching off to answer someone else’s call. Later he also offered me lots of tips and advice about Albania and my route to Istanbul. He and Sunny also offered me a spot on the day trip to Kotor, a fortified town that I had visited the day before and close to where I had started that morning. After only a little hesitation I accepted. 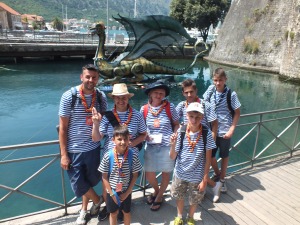 The next morning it was an early start, though from the scouts perspective I had a long lie in. We had breakfast, which like lunch consisted of tinned meats and bread, and then went to flag raising parade. I haven’t been to a flag raising parade in about 10 years as I avoided them even when I  was an active Scout. They were always a little early for me and by the time I was about 13 I had the authority to tell everyone else to go while I stayed behind to make sure nobody stole my pillow. I must have looked a little out of place at this one, with no uniform or scarf, dressed in cycling gear and hopping about with a camera. After the parade we went to wait for the buses and killed some time playing a clapping game that I’d never played before. I wasn’t very good and the scouts seemed to take great joy in watching me lose. 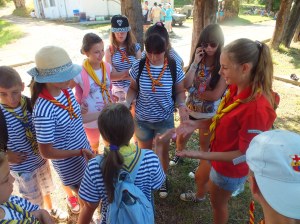 As we walked around the town Sunny told me lots about Montenegro, Croatia and the other Balkan countries and after the trip we went to the beach where I had a swim and a much needed shower. I also got talking to another leader who offered to get my clothes washed at his house in Bar. Everything was going really well and it got even better when one of the Scouts presented me with her Scout scarf, in the national colours of Montenegro. I felt like a proper member of the jamboree gang. 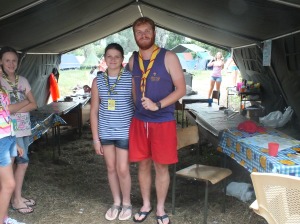 The scouts, who ranged in age from about 8 to 18, were initially a little wary of the strange, ginger-bearded Englishman. But as the day wore on, and word of my appalling skills at the clapping game spread, they became a lot happier to talk to me. In fact, by the evening I felt a bit like a celebrity and at one point I was mobbed as two or three tried to teach me their language while at the same time five or six wanted to play the clapping game, one was asking me question, another wanted to box with me and yet another was waving a small ball around, wanting to play football.

Kids also ask much more interesting questions. I love telling people about my trip but its much more fun when you’re being asked if you eat snakes or squirrels or bears. And the looks on their faces when you tell them that they’re delicious, or hard to catch, or taste like chicken made it almost impossible for me to look serious as I gave my answers.

The evening wasn’t completely stress free though. As I was chatting to the only American on the camp there was a high pitched scream from a large tent. A snake, or more likely a skink (limbless lizard), had been spotted by the tent and appeared to have darted inside it. The leaders went into overdrive as scared and upset scouts called concerned parents and both had to be dealt with. I was asked if I had any snake hunting experience, which I don’t, but I figured I’d seen enough episodes of Bear Grylls to make myself useful. After confirming that it wasn’t likely to be any kind of deadly venomous snake I found myself and the American girl combing the whole tent for the creature, with no luck. We overturned everything but with all the commotion I’m sure it wouldn’t have hung around long. 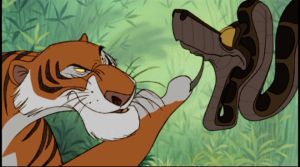 I also got an email from iranianvisa.com, the agent who was organising my visa for Iran. I was informed that because of my British nationality my visa had been refused. They are only permitting Britons to enter if they are on organised tours, which I couldn’t afford even if I wanted to pay for it. Its a big blow as it was one of the the countries I was most looking forward to visiting. Now I have to think about what I want to do and where I want to go.

In the end, the game (which I won once!), language lessons, questions, kick about, snake hunting and the news about Iran all combined and by 11pm I could barely stand. I went to bed, earlier than most of the Scouts, and quickly dropped into deep, dreamless sleep.

I had been invited to stay at the camp for the remainder of the week but by the next morning I had decided that I wanted to move on. I have a long way to go and I have lots to think about so the next morning I said my goodbyes and waved the Scouts off as they left on their day trip. I had never been to a Jamboree before and I’m so happy that I got the chance to get involved with this one. Montenegro has surpassed all my expectations and I’m lucky that my route, which seems to be changing with every passing week, passed through this beautiful country.

If you would like to support me on this trip then please help me by helping Hope for Children. A charity that works to help orphaned, poor, and exploited children around the world. If you’re in the UK you can text ‘JJVW50 £3/£5/£10’ to 70070 or go to http://www.justgiving.com/jamesvsworld and donate online. Thank you.

5 thoughts on “James Goes To Jamboree!”