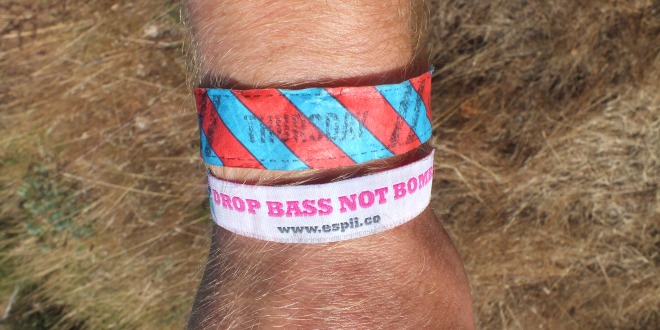 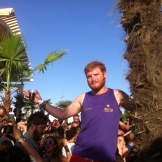 I knew when I started this trip that I was likely to end up in some strange places. I’ll no doubt see strange things few people have seen and stay in some places few people have stayed. In fact, I’ve already done that, few people can claim they have slept in a small field next to a ten foot pile of horse manure. Me and my brother Sam, we can.

What I wasn’t expecting was to end up at an international House and Techno music festival in Croatia, but that’s exactly where I was just a few days ago.

It started in Venice when I was sitting outside the camp-site bar on my rest day and I met three DJ’s who are part of a collective called Thick As Thieves (Check them out here). We spoke briefly and then they left, asking me to look after a beer for them. They didn’t return. Unsure what to do with the unopened bottle when I was finished I decided to take it with me. I figured if I saw them and gave it back, great, if not, even better. 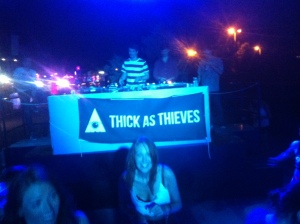 I did see them again and over the night I spent more time with them, they even played a set at the small club that started up on the Friday night. When the night was over we said our goodbyes and I was pretty sure I wouldn’t see them again, but I had their number and they told me where they were going. Hideout Festival, Island of Pag, Croatia.

I was in a bad mood. The night before I had been forced to camp on a hill. A rocky hill. A steep rocky hill, with thorny trees. In these situations I sleep in my hammock rather than the tent. The trees were not very strong but after several attempts I managed to get the hammock up, make myself dinner, and get to sleep. 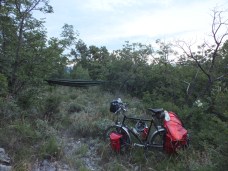 I gave a groan.

Within minutes I was soaked through, my sleeping bag was sodden and a pool was rapidly forming in the hammock. I jumped up and ran barefoot to the bike, cutting my feet on the sharp rocks as I ran. I grabbed the bike cover and dived back into the hammock, using the (once waterproof) cover to protect myself from the rain. There was nothing else I could do. I didn’t dare look at the time, afraid to find out how long I would have to endure the wet and the cold and the thunder roaring above me.

Eventually, morning came and soon it was hot enough to dry my things before I set off again, my mood almost as foul as the weather had been. I didn’t brighten up until I saw a sign up ahead, for the Island of Pag. It was now Thursday and I remembered that the Thick as Thieves guys would be there until Thursday or Friday. I gave them a call to see what was happening. One hour and a ferry ride later I was at the festival. 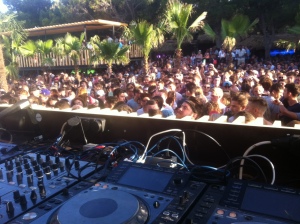 I’ve been to lots of festivals before in the UK, but Hideout was something new. First off, the crowd were very different. I may have heard the world ‘Chav’ used once or twice in discussions about the people, and there was certainly a lot of testosterone flying about. There were also lots of drugs, and little or no effort made to hide them. Not that it mattered, I didn’t see a single police officer and there were stalls selling everything from bongs to balloons filled with laughing gas. The final difference was that this festival was all about House and Techno music, Ben Howard would not be making an appearance.

I got chatting to people and in the first half an hour I was given food, drinks and offered all kinds of other stuff. Soon after the guys arrived and the night really got started. 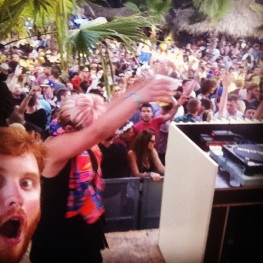 The music went on all night, and long into the next morning. By the time we dropped onto the beach at 10am it seemed like a weeks worth of events had been squeezed into just one night. I had been given a free guest pass for the festival, sorted out for me by the TAT guys, been back-stage and VIP for most of the night, including when some of the biggest names in House music, such as Skream And Disclosure, were playing their headline sets. We had met and made friends with some girls backstage who I thought I recognised. It turned out two of them went to my secondary school and one went to the same primary school too. Small world. And I had danced, something I didn’t realise I had missed until I started doing it. 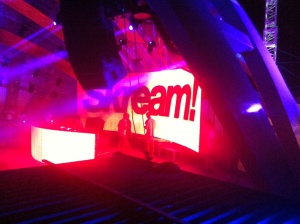 But, inevitably, there is a price to pay after drinking and dancing all night. By the time we got to the after-party (which was closed down once by the local mob until they were paid off), I was shattered. I dragged myself over to a sofa and woke up five hours later. When I emerged into the sunlight I found that a few of the people I had met the night before had ‘borrowed’ a boat, sunk it, and as a result all their bags and everything that was in the boat was soaked, phones included. 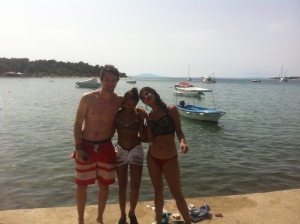 We spent the day resting up, I even treated myself to dinner in a real restaurant, and though the festival was over the music continued that night, so we partied again but on a much, much smaller scale. The TAT guys were leaving early so I stayed with the girls we had met the night before. All too quickly my festival was over. It was a welcome and unexpected break from cycling. I had locked Dora to a tree deep in the forest by the beach on the first night and after some searching I found here again, untouched, except by some ants who had made my front pannier their new ant hill, complete with larva. 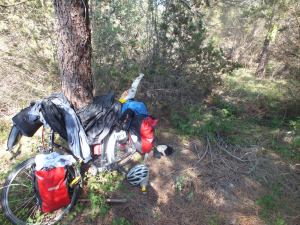 I had a great weekend so I want to say a huge thank you to the girls who made sure I had a place to stay and who were great fun night and day, and of course, to the guys from Thick As Thieves, who got me to the festival, into the festival and made it such an awesome experience. Thank you guys.