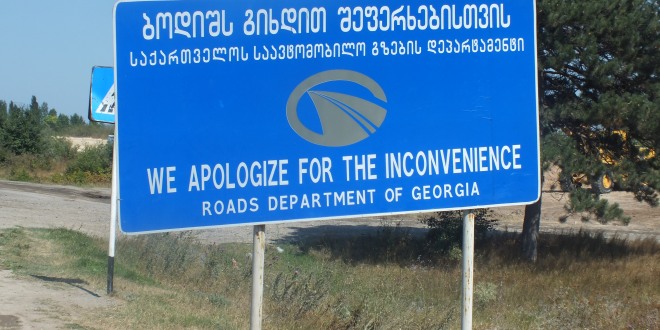 When planning this trip one country stood out. It was going to be challenging, different and spectacularly beautiful. I would see some of the worlds most dizzyingly sublime mosques and ancient architecture. I would cross a vast desert and experience hospitality that is reported to be like nothing else in the world. And all this comes with a light sprinkling of danger and the excitement of being in a country that few would dare to visit, let alone cycle through alone. Of all the countries I was planning to visit, Iran was the one I was most looking forward to. Which is unfortunate as they won’t let me into the country.

On two occasions now my application for a visa has been refused. I first applied via the online visa agent IranianVisa. Their website claims to be able to obtain a visa code (which is used to get a visa stamp at an embassy) for 96% of Brits within 7 – 10 days. Three months after I replied, whilst I was camping with the scouts in Montenegro, I received a message saying that my request had been denied because of my nationality. 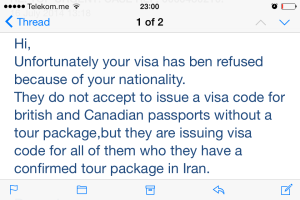 I was gutted by their decision. I had read that Americans had to go with an organised tour but now it seems English people now can’t travel independently either. I had all but given up on Iran, but a few weeks later I found myself outside the Iranian consulate in Trabzon, Turkey. I arrived a little late as I’d been stood up by a CouchSurfing host and the best place I could find to camp had been a large storm drain by the sea in the industrial outskirts of the city. It was full of trash, burnt wood and plastic, and evidence of the nasty kinds of drugs being used. Thankfully, there was only one crazy, homeless person with a knife in the tunnel that night, me. 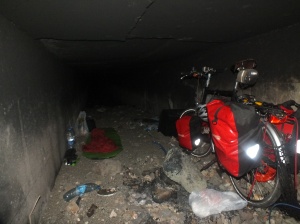 Sleeping in a storm drain in Turkey

When I arrived at the consulate there was a small line and some people had already been waiting over an hour, but everyone was in a good mood. The consulate had been closed for the whole of the week before and now that it was open again they were processing three times the normal number of applications. A smiling man walked up the line, checking passports and handing out forms to those near the front. After an hour it was my turn.

“Hello. Where are you from?” Asked the smiling man.

The words had barely past my lips when his smile dropped and he suddenly looked serious. He asked if I had a visa code and when I told him that I didn’t he closed my passport with a snap and handed it back to me. Nothing I said would change his mind and I had no choice but to walk back down the line of German, Dutch, Moroccan and French travellers who would all have a visa by the end of the day. I hadn’t even made it through the gates.

As I walked away I felt angry, upset and embarrassed. There was no good reason for my visa to be refused. Iran is a safe country to travel in, providing you take the usual precautions. If it wasn’t safe then there wouldn’t be another twenty excited Europeans still waiting in line. I was being refused because of a few past events and the fact that their government and mine don’t see eye to eye on a few things. I’m not sure which government I blame more for my rejection. This final refusal also meant I really would have to change my route once again, though the festival in Croatia is a much better reason for this than having my visa refused. It’s not all bad though, the one door closing has opened a few new ones, namely Georgia, Azerbaijan and then the Stan’s across the Caspian Sea. 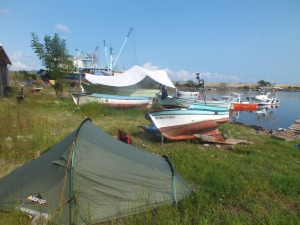 First up was Georgia. Already there were three Brits on their own cycling adventure around the world. We planned to meet but while I was in Istanbul they were almost in Georgia already, almost 2000km away. With them I have the chance to cycle the Karakorum Highway from China to Pakistan, but only if I can close the gap and catch up with them. I decided to take a bus 700km from Istanbul to Samsun, halfway across Turkey. It wasn’t an easy decision but I figured it’s better to skip half a country now than a whole country later, and the Karakorum Highway should be worth the small bus ride.

So I took the bus and cycled the last 500km to the Georgian border. Along the way I enjoyed amazing Turkish hospitality. I drank about a million cups of tea, was given a pizza by a random man in a café and was taught the best way to suck the eyeballs out of small fried fish by some old men in a small harbour. 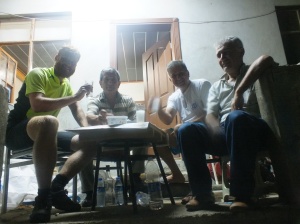 The harbor masters who taught me the art of eyeball eating

The Georgian border was a crush of humanity. I wasn’t allowed to go through as a vehicle so I had to crawl with Dora through passport control with about three hundred other people. Finally though I was through and pretty soon I reached the the seaside city of Batumi. It was very different from Turkey. Suddenly I was surrounded by bars, music and girls in short skirts and bikini’s. I thought back and realised that despite cycling along the black sea coast for almost a week, I hadn’t seen many people on the beaches, and only men and children seemed to spend much time in the water. I only stayed in Batumi long enough to have an ‘I’m-in-a-new-country Celebration Beer’ (It was very cheap), check my emails and be told by the very helpful Azerbaijani Consular Officer that it would take five days to get my visa. Too long. So I set off towards the capital, Tbilisi, taking a mountain road recommended by two Georgian cyclists I met in Istanbul.

I’d like to meet those guys again. Then I’d like to give them a piece of my mind. 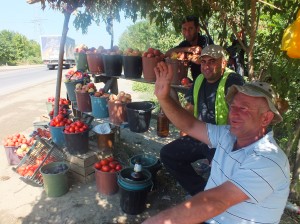