Another young boy is brought forward, half dragged and half dancing a giddy jig, eyes rolled back in his head and arms swinging wildly. Once at the centre of the circle of energetic drummers, two men step forward to hold the boy’s arms while another smears a pinch of white powder onto his cheeks. The spear, over a metre long, can be seen moving towards the boy though the throng of people. The drums beat faster, tempo rising with the cries of the crowd. It’s hot and the smell of dust and bodies fills the night air. The sharp tip is placed against the child’s cheek and, as the drum’s intensity peaks, it’s pushed through his soft flesh. First his left cheek, then seconds later, out through the right. He isn’t moving anymore. A lime is placed over the point of the spear and the stunned nine year old is lead away towards the parade even as the next possessed boy is led to the centre.

The festival, observed on the night of the full moon once a year according to the Tamil calendar, celebrates the victory of the Hindu god of war, Lord Murugan, over the demon Soorapadmen with a divine Vel spear, given to him by the Goddess Parvati.

Thaipusam is a thanksgiving ceremony in honour of Lord Murugan and an opportunity for the devout to give penance for past sins so their wishes might be granted in the future. It’s held by members of the Tamil community all over the world, but it’s particularly important to Hindus in Kerala and the southern states of India.

Not long after sunset the festival is in full swing. Huge speakers kick out blaring music to compete with the rhythm of the drums. Men line the roads, looking up at the trucks surrounding the temple. Each of these has one or more logs lashed to it, the ends protruding out over the windshield with white ropes hanging from them. These ropes are attached to large hooks, over six inches long and each passes through the flesh of the young men hanging below. Each man has eight or ten hooks through their legs and back, with short arrows through their cheeks. Some have yet more hooks attached to their fronts, and more men hang from these. These men, with vacant expressions, bob slightly in the hot air as the festival moves around them.

Garudan Thookkam, Eagle Hanging, is a ritual performed at the Kali temples here in Kerala. The act of piercing constantly reminds the devotees of Lord Murugan and gives the bearer immense power of endurance. Devotees can hang for hours before they are finally paraded around the temple. They, as well as the spears and even the trucks, are covered in white antiseptic powder, but this is all the medicine they receive. No painkillers or psychoactive chemicals are used to relieve or distract from the pain of being pierced with hooks or spears, or left to hang by their skin for hours on end as they are paraded through the streets.

In the centre of the commotion is a concrete shelter that serves as a small shrine to the Goddess Kali. Here, boys as young as six or seven are brought in preparation for spear ritual. I was invited to watch as a seven year old was sat on the sandy earth outside the temple before the shrine. He looked overwhelmed but unafraid. He is about to go through a surreal and powerful ordeal that will take him into the giddy trance state necessary to help him bear the pain.

His mother, kneeling behind him with tears streaming down her face, begins to shout at him. Then his family join in the chant, his young sisters and brother, cousins and aunties too, all yelling a hypnotic chant at the top of their lungs. His father stands close by, looking a little unsure. The chant gets louder, voices scream at the now frightened and upset young boy. They take his arms and shoulders and begin to shake him. The drumming gets faster. His sister, perhaps nine years old, shouting and crying, detaches herself from the group and throws herself down before the shrine, prostrate before it she seems to beg as sobs wrack her fragile frame. Within a minute the boy’s head drops to one side and his body begins to fit. His eyes roll sickeningly. The women are quickly moved aside as the father and some other men lift the boy, taking him out through the temple towards the sound of drums and the shining spear. His sister, still sobbing uncontrollably, rises from the floor before the shrine and buries herself in her mother’s arms.

As well as a way to honour their gods and absolve them of sin, the ritual seems to be an important rite of passage for these boys and young men. Most will participate for up to five years and others continue into old age. The ceremony has power, and the fact that devotees report no pain or bleeding when the spears and hooks are removed adds to the mysticism of the ritual. Many cultures have had similar rituals, such as the Nordic Berserkers, who would get themselves into a trance like fit before battle. African shamans would use the state for divination and protection, as well as Christian faith healers, who use it to make money. 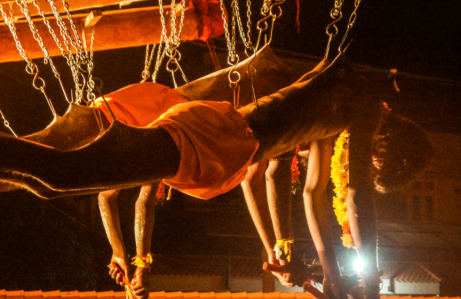 The ritual was initially shocking and unnerving, but the atmosphere was contagious and I was soon enthralled. The boys and young men show great bravery and I’m sure most come out of the other end with little memory of the fear and pain and only the pride and satisfaction at having done something so tightly connected to their community. Even so, as I climbed back into the rickshaw headed for home, I didn’t envy them one bit.