2012 was good to me. I graduated Aberystwyth University, got my degree and ended what were three truly fantastic years. The summer was also a highlight, kicking off with a trip with Aberystwyth Uni Canoe Club (AUCC) to the French Alps.

It was an awesome way to finish my time at Aber, not least because I improved my paddling ability tenfold, which meant I could do much more exciting rivers when I got home, without thinking they were going to kill me. Over summer I got a job working in The Normanby, a pub at the end of my road, convenient eh? Whilst bar work is a sure-fire way to ensure your social life is reduced it was great fun most of the time and having nocturnal friends meant that the summer passed by in a flash.

The end of the summer signalled the start of the next big chapter in my life, grown-uphood.

I decided to teach abroad to curtail the onset of this, to take advantage of my lack of responsibilities and maybe explore some of our world while I’m doing it. So by the end of summer I had just about secured a job, in Korea. It wasn’t something I had anticipated. It seems to me that most plans of this nature, most plans really, have a habit of falling down before they really have a chance to start. Money is usually a factor in this, but relationships, work, family and the combined issues of confidence and fear can also play major roles.

I didn’t have any money, which is why I’m working to fund my travelling habit. I’m also pretty bad at saving money, my student finance documents read like a Stephen King horror novel. But working solves that issue, or will once I get my first paycheque in a couple of weeks.

Family and relationships are a little more difficult, luckily my family have been great.

I meet too many people who say their parents ‘concern’ was the biggest obstacle to overcome before travelling, the barrage of questions and highlighting of the dangers leading to either doubt in the travellers mind, or a nagging sense of guilt over leaving. Like I said though, mine were great throughout the planning and the preparation, I got the feeling that the questions they were asking were more to prevent me getting scammed than anything. You’re always gonna miss your family, but that’s no reason to not travel, even if it’s for a long time. Friends too, I managed to see most people a few times before I left, and I had a party with friends and family a week before my flight. It’s tough leaving people behind, missing out on a year or more of meeting up, nights out and long sessions sitting at the bar. Worst of all you miss out on being a part of people’s lives, but that’s still not a good enough reason not to go away. Lots of people have other relationships, girlfriends and boyfriends. Not something I had to worry about this time round but I remember when I was planning on just 2 months of travel to India in 2011. Having a relationship was the biggest consideration then and I can only imagine its worse if one side of the couple is planning on moving away for a year or more.

Finally there is the silent killer of plans, the secret agent sent to prevent change, form excuses and turn every molehill into an insurmountable summit. This is the confidence and fear element, and it can destroy plans as seeds, preventing them from ever growing. I figure no matter what you do there will always be issues. Language barriers, travelling alone and navigating somewhere that is alien and on occasion, very scary are just three of the thousands of reasons that someone’s mind might lead them to abandon their plans and stay in the job that bores them or a routine they despise. It’s also one of the hardest  to overcome. I found a good way to get over it is to buy a plane ticket, at least for me they’re too expensive to take back once they’ve been booked, so choice is removed from the occasion and your fears can’t hold you back.

What have I been up to recently?

Well as it has been New Years we got Tuesday off teaching at school, we also didn’t teach classes on Monday. All the staff went in at 12 and we spent an hour clearing our desks and sorting out our stuff for the new year, after that we all jumped into cars and went for our New Years meal. This was a little awkward, we three native English staff were between the schools directors and the Korean staff. Most conversation was in Korean, whilst two or three of the Korean teachers have a good working grasp of English most don’t and so conversation in English doesn’t exactly flow. Despite this I think everyone had a pretty good time. Scott (another English teacher at the school and the newest person to move into the house) and I had a few shots of Soju, Korean alcoholic spirit with a wicked reputation for paralysing hangovers, bit odd to be drinking with the directors at 2pm, but I figured it would be rude to refuse, and I also wanted to try it. We went to a duck restaurant on the outskirts of Incheon, the food was nice, it was Korean BBQ style so we cooked it all ourselves.

The weekend was spent exploring Seoul. Joe and I went to Gyeongbokgung Palace, one of Seoul’s top sights, unfortunately it was closed and we could only get into the

courtyard, which was still pretty cool. Sadly it’s not the original, which burned down, or the replacement, which was destroyed by the 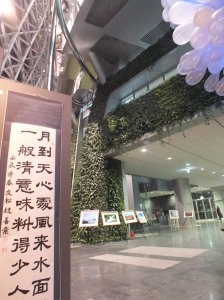 Japanese in the early 20th century. What stands now is a modern reconstruction and is still being slowly developed. It was bitingly cold but we had a walk around the area, where a huge statue of King Sojung the Great stands (also a modern addition). Sojung is credited with overseeing the invention of Hangul, the script and language used in Korea today.

We also came across a huge outdoor ice rink (saving that for another day) and had a look around the city hall, which was a huge glass building shaped a bit like a wave over the old city hall. Inside are cultural exhibits and the inner building, which is inside the glass bubble and covered in live plants and vines. It was pretty cool to stand inside. After that we jumped onto the subway and headed home to rest up before Mondays New Years activities.

New Years Eve was different to what it would have been at home, Joe and I met with Curr in Itaewon, Seoul.  Rung in the new year in a small western bar with real beer before heading out to a few clubs and dancing the night away till about 4. Great night and a good start to the new year.

That’s it from me. Best of luck for the rest of the year everyone.