Merry Christmas! Nearly three weeks here in Korea, it’s hard to believe. I’m happy to say it’s going really well, I’ve managed to avoid making a fool of myself and my boss hasn’t shouted at me, yet.

Liam has left, we went for Korean BBQ on his last night with some Korean staff from the school. It was nice to see everyone outside work and having some fun, even tried a pint sized Korean shooter drink made with beer, Soju (Korean spirit, tastes like sweet watery vodka, apparently the hangover is the worst) and coke. The others went to Bupyeong for the night, but I, being the newbie that I am, had to go home to lesson plan. Gutted, but a mistake in class at this stage could earn me months of extra observations.

This post is about food, with a little Christmas cheer thrown in at the end.

My first taste of Korean food was on the flight, it was ok, but it doesn’t come close to what I’ve had since. The meal was Bibimbap, a rice dish with onions, mushrooms, bean sprouts and other vegetables.

Like I said, it was ok but it’s no comparison to the Bibimbap I had a few days ago. Our local place to eat is Tomato Kimbap. It’s where we usually go for breakfast and dinner, it also where I usually buy my packed lunch for work. The Bibimbap was delicious. It was served in a very hot ceramic bowl, steamed rice on the bottom with long thin mushrooms, bean sprouts, cucumber and seaweed with a raw egg broken on top. It was lovely, and I’ve just decided I’m having it for breakfast. Once it’s served you mix it yourself, the heat of the bowl cooking the egg.

This is served, as are most meals, with a number of side dishes, or Banchan. In the picture (left to right) is stir fried fish cake, it’s sweet with an almost BBQ like sauce. 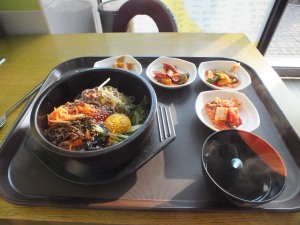 Every time I’ve had it it’s been served cold, but you can have it hot too. Second is slices of sausage with vegetables and a sweet sauce. All the sausages here are like frankfurters at home, even the expensive ones. Been craving a proper Cumberland sausage for a while, but I don’t have high hopes. The third is Cucumber Kimchi, a variation of the forth dish, normal Kimchi. I like all of these, others that I’m not so keen on are usually radish based. The bowl bottom right contains a simple stock, quite salty and with spring onion slices floating in it.

My favourite dinner so far has been Korean BBQ, or Gogigui. You order the meat, it’s delivered to the table raw, and you cook it on a small barbeque set into the middle of the table. Where we went to in Bupyeong we were given loads of side dishes, including a hot bowl of sizzling scrambled egg, a spicy fish stew and all the usual trimmings. We also ordered a huge bowl of noodles each. It was an awesome meal and I’ve had it again since.

The food here is fairly cheap compared to at home. Breakfast and lunch usually come to about 10,000 won which is about £6. A feast of delicious Gogigui usually comes to about 20,000 won a head, or £12. So, so far so delicious. The best news is that I have so much more to try, including the appetisingly nicknamed Penis fish, which, even after being chopped up, keeps squirming.

So that’s food. Also this week I’ve explored Chinatown in Incheon and the National Museum of Korea. Chinatown is a short train ride away, I went solo and had a walk around. I left it pretty late and by the time I got there evening was already approaching.
The place is pretty small, I walked through he streets before heading up to the hill to Jeyu Park, also known as Freedom Park. Where a statue of General McArthur, an American General who led the Incheon Amphibious Landing Operation during the Korean War stands, with great views over the docks.

At the top of the park there was also a stage and a group of people were doing exercise dances as the sun set. On the way back to the station I saw a big queue outside a Chinese food place. Wasn’t sure what it was for but I thought I’d join it. Turned out to be for what I think are called Char Siu Ba, steamed buns filled with pork and spring onion.

There were others with pumpkin, sweet potato and sweet black bean paste too. They were cooked in huge ceramic urns. Dinner sorted I headed back home.

Yesterday was Christmas Eve, work was a little different than usual, I had a few normal classes at the end of the day but in most we made decorations and played Christmas games. We native teachers also had the privilege of playing Santa for the kids, got all dressed up and everything to go around the classes and hand out their Secret Santa presents. In the evening Joe, Kurr (a former teacher at the School) and I headed into Bupyeong for the night.

One place we go regularly is a small bar called Woodstock in Bupyeong. We usually end up staying there till late and last night was no different, what was a little different is that the owner asked me to work behind the bar when one of their staff finished, in exchange, free drinks! Altogether a great night, bit of drama at the end but nothing major. Got home around 5am and crashed into bed. Slept like a log.

Woke up late today. Went to HomePlus for Christmas lunch, takeaway pizza. Later Joe and I met up with Kurr and two girls that I’ve met once or twice. Christmas dinner was a classy burger in Incheon. Now I’m back home, just been Skyping with my family and now it’s time to lesson plan. Oh the joys of teaching.

One thought on “Merry Christmas! And Now I’m Hungry.”