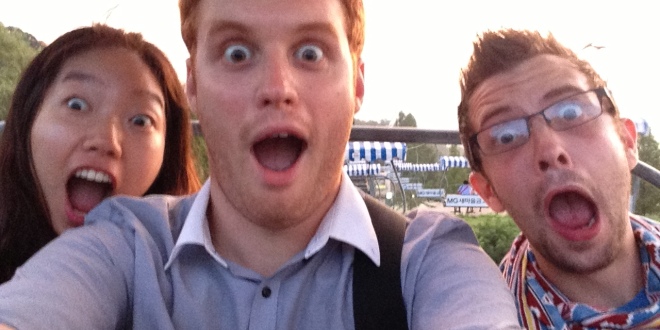 So far I’ve had by man bits squeezed by an aged Korean man and left a friend in a strange house with a strange man. If you missed all this excitement then check out Part 1 here.

So, how did we get from here to the laughing, almost weeping in a Korean fast food restaurant?

Susie and I reached her house, Josh was still with our Pakistani friend in Hongdae, and we slept through the remainder of the morning. I couldn’t sleep in for the rest of the day, as I would have liked, as I had an appointment at the eye clinic for my second post-LASEK check-up. Won’t talk about that now, but I’ll tell you all about it soon.

After the check-up (everything’s good, don’t worry) , Susie and I grabbed some food in Myeongdong (Bongchu Jjimdak (봉추찜닭) Chicken simmered in a soy sauce sauce, delicious) and looked around for a new t-shirt, unsuccessfully. Then we met Josh, who looked incredibly unhappy having spent 5 of the last 6 hours on the subway.

Turns out that after suddenly waking up on a strangers bed and finding the stranger, in his boxers, about to climb in next to him, he decided to make a hasty retreat and found himself down an alley in Hongdae with no idea how to get home. He eventually found a station, in which he fell asleep whilst waiting for the train. How long he spent there he doesn’t know, but he eventually got on a train. It was the wrong train. He realised and took a train back to where he needed to get the right train. Then he got the wrong train, again. Fuming now, he got the return train and got on the right train, heading towards home. Happy that he was on the right train, he fell asleep . This was yet another mistake. He missed his stop and continued to the end of the line, where he was woken by an angry Korean man who followed him as he once again changed train and went back the way he had just come. Forcing himself to stand for the rest of the journey, he finally got home. He showered, changed, put some laundry in the machine, and left to get the train to meet us, back in Seoul. He didn’t know it then but by the end of the day he would have been on the subway for over seven hours.

All together again we told Josh our plan for the day. On Sunday we were planning on going to Everland, Korea’s biggest (and best?) theme park, which rules out too much drinking or strenuous activities. We were already shattered from the night before and so we decided that a nice stroll around Seoul Grand Park Zoo, which was having a week of late openings, would be ideal. To Josh’s horror, we took the train. 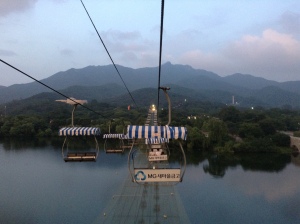 By the time we reached the zoo it was almost 6pm and the day had cooled off a little. We paid the tiny entrance fee of 3000won (about £1.80, not sure how London Zoo can charge over £15), and the extra 5000won to take the sky lift to the back of the zoo. We figured we’d start at the back and work our way to the entrance from there. 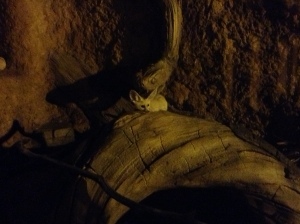 It was dark when we reached the back of the zoo and jumped off the sky lift. We were greeted by the foxes and the wolves, almost all of which were fast asleep. In fact most of the zoo seemed to be asleep, or missing. The monkeys all seemed to have been taken inside for the night and the unlit enclosures of most of the animals looked deserted. I should also add that they didn’t put too much thought into most of the cages, and many had thick bars placed very close together, some of these also had ivy growing up and between them, which was really pretty, if you didn’t mind that you couldn’t see than animals through the leaves.

Despite these issues it was nice to have a walk around, and some animals were even more interesting asleep. I doubt the huge alligator would have come so close to the side of the open top enclosure during the day, but it seemed to be an idea sleeping spot, and I think I could have even touched its ridged back if I wanted to. I didn’t though, I’ve always been quite attached to my arm, and intend to stay attached to it for some time.

Another animal the looks good sleeping is the giraffe. They sit down when they sleep but keep their heads and necks up straight. It looks a little strange, they didn’t move their heads at all as they slept.

Seoul Grand Park Zoo have taken the viewing experience one step further. They know the people who come to the zoo want to spend as much time watching the animals as possible, but in reality people occasionally need to do things like go to the toilet. In order to maximise exposure to the animals, specifically the giraffes, they came up with the idea of having the toilets with uninterrupted views of the animal enclosure thanks to a mirrored glass wall. So you can do your business whilst the watching the giraffes do theirs. Genius idea, and one of the reasons I will be returning in the daytime sometime soon.

After the Zoo we decided to grab some food and watch a movie. We headed to a place near Susie’s that had both, only to find that the only English language movie wasn’t showing till 1am (It was Snowpiercer, I’ve seen it since and recommend it when it gets to you, strange but enjoyable). We skipped the movie, grabbed some food, picked up some beers and invented a drinking game before getting to bed.

Our bodies were worn, our brains were a little fried, and we had only four hours to sleep before we had to get up go to spend the day at a theme park, and we’d only gotten about 5 hours of sleep the night before. Plus we thought Josh might turn axe murderer the next time he saw a train. We were suffering, but we would soldier on.