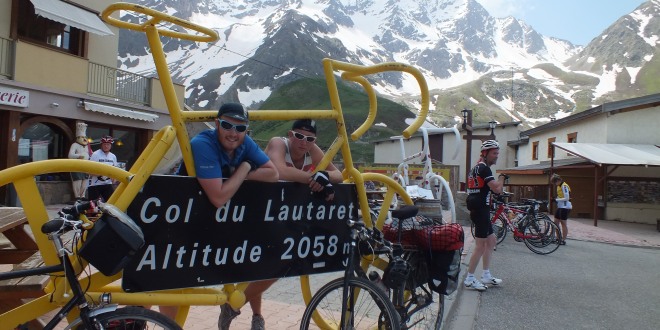 We made it! After 21 days on the bike (and only one day later than predicted), Sam and I successfully managed to get to the camp site in L’Argentière-la-Bessée, near Briancon. We’ve come here to meet Aberystwyth University Canoe Club, of which I was a member, on their annual trip to kayak the rivers of the Alps. Now we’re going to spend a week or so relaxing and recovering and enjoying the break from cycling. 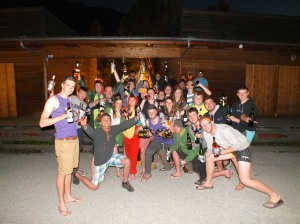 We got our first glimpse of the Alps a few days ago and the excitement hit me like a physical force.  To me mountains have always symbolised adventure. I remember seeing the mountains of Snowdonia when I first went to Aberystwyth to start university and the awesome peaks of the Himalayas as I was travelling in India. Whenever I see mountains their presence always makes me feel breathless and  lightheaded, though that could be the altitude. What I didnt antcipate however, was just how long it would take to get over them. They look much flatter on paper. 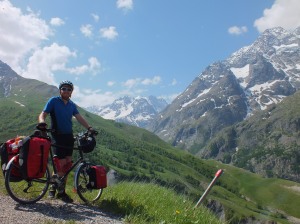 We did most of the climbing over two days, before that there weren’t many downhills but the climbs were gradual and not too taxing. After that it got harder. Things weren’t helped by the fact that Dora (my trusty bike shaped companion), complete with 5 panniers loaded with my kit, weighs about the same as a baby elephant, if a baby elephant weighs about 90kg. Thankfully though, she also has a huge range of gears so I was able to crawl up inch by inch on my lowest granny setting. It was long, slow progress but not too tiring. Sam does not have the luxury of granny gears but somehow he managed to make it look easy as he climbed up the hills with just seven (fairly high) gears.

The greatest challenge was the Col du Lauteret. Starting at 719 meters, it’s a 1400 meter climb to the top over a distance of 40km. The real climbing started about 18km from the top and by the end of the day we were just 3km and 150meters from the summit. As it was getting late and we were both shattered, we decided to summit the next day and found a spot on the mountainside to pitch our tents.

It was an uneasy night.

First, we were spooked by a strange noise just as were were going to sleep. It sounded human and seemed to come from just outside the tent. I jumped up and out of the tent and had a look for the source. There was nothing there, human or animal. It took a little while to get to sleep after that and before long I was awake again as wind buffeted and battered the sides of the tent. I heard Sam moving around too as his tent was being whacked by the wind and the long grass. I wasn’t too worried about the wind but I couldn’t help thinking about the sizeable drop less than two meters to my right. Once again, it took a while to get to sleep. Finally, I was woken a few hours later by the sounds of munching by my ear. I think it was probably a deer, whatever it was it scared the crap out of me. 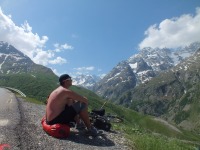 We got up early and made our final climb to the top of the Col du Lauteret in about thirty minutes.   It was lovely to get to the top and know that it was all downhill from there. We got a celebration photo at the top and mentally prepared ourselves for what was going to be a mammoth decent. Sam was a little apprehensive, mainly since the road didn’t have many barriers and his brakes were bolted on to  his bike in a professional bodge job last week. When we were ready, having set up a GoPro to the back of Sam’s bike with a stick and some cable ties, we began to fall.

And we fell for a long time. In the same time it took us to climb three kilometres, we fell over twenty two. It wasn’t too steep so I felt pretty good and barely touched my brakes until we got to the bottom. I remember thinking that this is how it must feel to ride a motorbike, a thought that was quickly blasted from my brain as three real motorbikes zoomed past so fast it made my bike wobble. Soon enough we reached Briancon and then it was just a short trip to L’Argentiere la Bessee and some old friends from Aberystwyth and Edinburgh University (Hi Amy!). 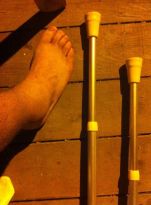 It hasn’t been all good though. Yesterday, whilst chasing a kayak along the river bank in the camp site, Sam managed to roll on his ankle. I saw a member of the club running towards me waving just moments before I was going to jump into the rapids, just for fun. He told me Sam needed to go to hospital. His ankle, thankfully, isn’t broken. But it will mean the end of his cycling trip through Europe. We’re going to wait and see what happens over the next day or two and work out the best way to get him home.

So we have a few more days enjoying the sunshine, water and very cheap wine surrounded by the mountains. They’re lovely to look at but I wouldn’t mind it if they were a little flatter, just a little. 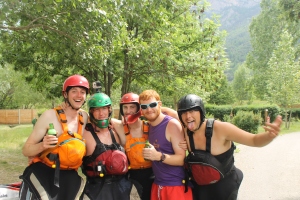