I thought in this belated post (sorry about that) I would take the opportunity to tell you about some of this things that are a little different over here compared to at home in the UK. I looked at some of the major cultural differences in my post of culture shock, but these are smaller things that vary from slightly odd to just plain different, but not necessarily bad. Some of these things I didn’t even notice till they were pointed out, or else I thought it was just me who was experiencing them, like the washing machine for instance.

In Korea it seems, most washing machines use cold water. I thought at first that we just had a particularly cheap or even broken one (broken was most likely, it lives in the low ceilinged wet room that also houses our shower and toilet). It seems however that this is the standard. Most washing powders sold in the store are for ‘cold washers’. I’d like to say that this was ok and gave me a more earth friendly perspective on how we should wash clothes at home, but I can’t. Not only does the machine fail to properly wash the clothes but it occasionally likes to rip them to pieces too. Luckily this hasn’t happened to me (yet), but at least one pair of jeans and an expensive shirt have fallen afoul of the Muncher Machine. Other household things that are slightly different are that most have under floor heating (which is lovely)  and few have an oven (which is less lovely).

When you’re walking along the street you notice a few other things that are a little different. At the moment they’re covered in ice, but at the moment it is around -14*C (feels like -23*C) so that’s to be expected. What I didn’t anticipate was that the ice covering doesn’t stop at the pavement. In Korea it seems gritting the roads with salt and stones is not the done thing. On more than one occasion I’ve seen a car or bus hit the brakes at a a set of lights and continue sliding along the ice for four feet or so. The UK has a death to population ratio of 3.59 for every 100,000, pretty low compared to most of the world. South Korea has a death to pop ratio of 12.7/100000. This is still lower than the world average (20/100000), and far lower than others, but those with the highest number of traffic related fatalities are  all developing countries, predominantly in Africa. 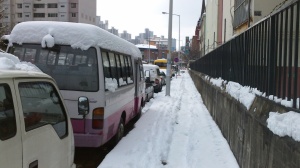 In a place like Korea, which has a strong economy and a developed roadway system, I would have thought they could grit a few of the roads. This is probably why pavements have become not only places for pedestrians, but alternative highways for motorcycles too. Nothing wakes you up in the morning quite like being rushed at by speeding bike on the pavement I can tell you. One last thing about the roads here, specifically the traffic lights. It seems in Korea that the meaning of a red light is subjective, and it’s down to the driver to decide whether they stop or not. Most seem to think if you’re turning left, you can jump a light. Others think if you’re turning right, you can jump a light. A few more think that the lights don’t apply if they’re going straight across the junction. It’s all a matter of opinion. 12.7 really isn’t that surprising when you consider it.

One thing I read about before I came and see almost daily here is elderly people. The thing that separates them from our beloved grandma’s  at home is that they are all busy, they all have a job to do. From sweeping snow or dusty floors to collecting paper and boxes for recycling, they’re always busy. Usually bundled up in fur hooded jackets and dragging trolleys stacked high with crushed boxes these little ladies seem to be able to stand any weather and a weight of recyclables that would have me panting for breath. I thought it was a little sad at first, but they don’t seem to be complaining. I think it could be down to a long history of agriculture where an extra set of hands will always be put to work, that’s my best guess anyway, I’m sure money and the government have a role in the lives of the elderly too. 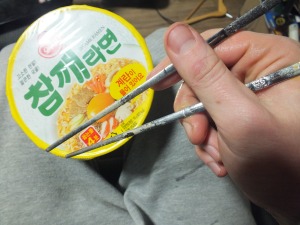 Now I love my sausages. Years of my dad’s out-of-this-world English breakfasts have give me a healthy (or unhealthy) appreciation for a good sausage. Cumberland or Lancashire, I don’t mind. Some like ‘em fat and some like ‘em skinny. The only sausage I don’t like is the classic hot dog sausage, also called the frankfurter. Imagine my horror when I discovered that the only sausages available here are just like frankfurters. I even checked the local megastore, Homeplus (owned by TESCO’s) and had a look at their ‘Finest’ Range of sausages. What did I find. Fancy looking frankfurters. Gutted. Other odd food things her  e include dried and fried squid being an acceptable bar snack (it smells as fishy as it sounds), and, not really odd, just different, is the fact that most food is eaten with chopsticks. I wasn’t too bad with chopsticks before I arrived, and Korean chopsticks are flattened slightly and made of metal, which I prefer. I haven’t yet mastered the elegant style of the Koreans, but I’m working on it, for now the clumsy western pen-hold method will suffice.

There’s lots more weird and wonderful things different about Korea, and not a few annoying and disgusting things too, but I’ll save them for another time.

Almost finished here, just want to say that I’ve signed up for a PADI Scuba Diving course that starts this weekend. Should be awesome and I’ll tell you all about it later. But now, it think you’ve heard enough from me.