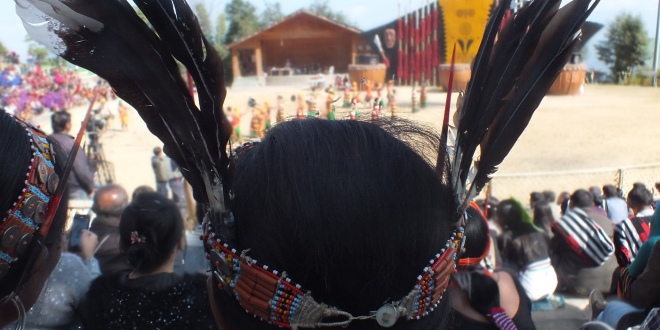 In December 2014 I joined a few friends on a trip to Nagaland, Northeast India.

Since arrive in the Northeast State of Meghalaya, India, the word Hornbill has been on everyone’s lips, also the world Nagaland, both of which I thought were quite strange.

The Hornbill Festival takes place every year in the far north-eastern state of Nagaland, much of which borders Myanmar. The festival celebrates the cultural history, food and traditions of the 16 distinct tribes, many of which are to this day largely isolated in the hilly rainforest of the state. All the tribes were once filled with fearsome warriors, famed for their elaborate ceremonial dress and the practice of head-hunting. Even today, elderly men from some tribes can be seen with the tattoos and markings on their faces and chests, only awarded to successful head-hunters.

Our adventure starts, as many often do, with me oversleeping. This wouldn’t have been a problem if Joe, a housemate from uni kayaking in Meghalaya, and Zorba, a pack-rafter and friend from Shillong, hadn’t also overslept. As a result it was pretty late when we arrive in Kohima, where the festival takes place, and met Darragh, a Kayaker/radio from Ireland who I’d previously met in Nepal. It was our first night so we cackled a few beers on arrival and soon got word of a party in a nearby hotel. Anticipating high drinks prices we took a few beers for the road and Joe and Darragh even stashed a few down their trousers, to be surreptitiously sipped when we were inside.

We entered the very fancy looking hotel by a side entrance where we found ourselves in a private party, being introduced to some impeccably dressed men and head-spinningly beautiful women. The style and beauty of the Naga people was a constant throughout our time at the festival. Even better, and to the chagrin of Joe and Darragh who were still sporting large can-shaped trouser bulges, there was a free bar. Over the course of the night there was lots of dancing and drinking and I admit I may have underestimate the power of free vodka served by generous bar staff. The next morning I woke up with a horrendous hangover and a rare gap in my recollections of the night before. After regrouping for breakfast I was told that the nights activities ha included more free alcohol, a little vomit, a broken window and a narrow escape from conflict. So overall, we concluded, it was a fairly successful night and we made our way to the festival.

The centrepiece of the festival is The Arena. It here that members of each tribe demonstrated the different activities, dances and games and the types of traditional dress they would wear for these. The outfits were amazing. Some featured bones or antlers, others had shells or small, brightly coloured feathers and on most could be seen the distinctive white and black striped feather of the Hornbill. Hunting most of the animals used to make these outfits is now banned and so each is treated with great are and attention. Many of the dances were quite slow and lumbering, lacking the energy I had been anticipating, but the games provided that. Variations of ‘tag’ had the crowd roaring with laughter and the winners were cheered and celebrated.

Another highlight of Hornbill is the food, though we learned that ordering the unknown can be a gamble. When we first say down to eat, hangovers still raging, the options were chicken, piglet, or dog. Brave men that we are, Darragh, Zorba and I all went for the piglet. Joe went for the dog. When it arrived, on a banana leaf plate, it looked a lot like beef or mutton, small, dark chunks in a spicy sauce. Darragh seemed to quite enjoy it, joe and I on the other hand, couldn’t manage more than one or two bites. The chunk I had was slimy and a little too chewy. I felt a little queezy, though that may have been the hangover, and pretty soon Darragh’s plate was piled with unwanted pooch.

Another feature of Naga cooking is spice. Naga and the North-East are home of the Ghost Chilli, probably the hottest natural chilli in the world. It’s not uncommon for a Ghost Chilli to get a Scoville Spice Rating over over 1,000,000. In comparison, tobacco sauce has a rating of 2500-5000. That’s a spicy chilli! I didn’t realise how spicy it was until Ben, who popped up a few times over the week, plucked a whole one from my hand and delicately nibbled off the tip. Not to be outdone, I took it back and took a little nibble myself. This continued until the chilli was gone an I casually filled the stem into the darkness. The casual demeanour didn’t last long as soon both of us were in quite a lot of pain. Swigging sticky rice beer, mixed with salt (yuck!) and sugar (better), in a fruitless attempt to stop the feeling that our tongues and lips had been cut to ribbons and seared with hot coals. After 20 minutes the feeling in our mouths dulled to just ‘very painful’ and with more rice beer I was soon back to normal. Darragh also had a go and managed two in one night, which would have made him joint first in the Naga Chilli Eating Contest, I we hadn’t missed it. We returned to on Morung hut, belonging to the Samtang tribe, most evenings and spent lots of time in the Chang tribe Morung, were the core of a tree that must have been a wonder to behold when it was alive, had been carved into a ten meter long log drum.

Our time at Hornbill ended with the grand final of the battle of the bands competition linked to the festival. Ben popped up again and at one point we pushed out way forwards to rock out at the front. We left ten minutes into the ‘special guest’ , ‘legendary guitarist’, Vinnie Moore, who swaggered alone onto stage, got his band going by pressing play on his iPod and scaring us off with his pretentiousness. The last hours before we left were dedicated to shopping as we rush around buying Christmas gifts at the many stands and stalls around the festival. Finally shopped out and already running late, we mentally prepared ourselves for the 13 hour journey home and set off home.