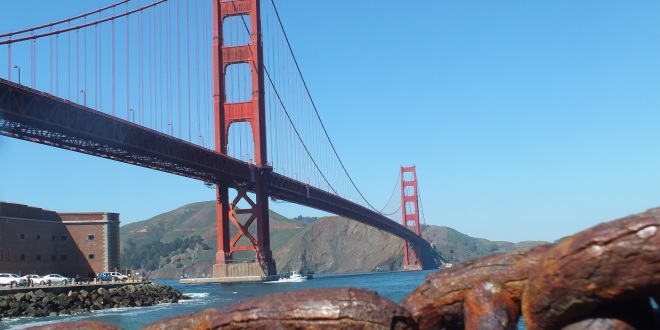 Almost ten months after leaving my home in London on Dora, my heavyweight champion of a bicycle, I have arrived in the USA!

I got through immigration without any problems, despite having no departure flight, no money and a passport that looks like it has been through a few wars. Before long I was bolting Dora back together and left the airport into the California sunshine.

I had arranged a place to stay through WarmShowers, which is like CouchSurfing, but for cyclists. My host lived in a place called Dogpatch in a converted warehouse, complete with roll-up meal door and a pink-hatted but otherwise naked mannequin in the main room. To get there I took a train from the airport (cycling wasn’t advised) and before I knew it I was fast asleep and unwittingly speeding past my stop, out of San Francisco and into Oakland. Eventually I made my way back but could only manage a quick chat and dinner with my host before I passed out for the night.

Consciousness returned eighteen hours later. I had slept for almost a whole day and I still felt like I’d been hit by a particularly mean bus. It was all I could do to drag myself to the supermarket to buy some food for lunch and then drag myself home to cook it, and my host was kind enough to treat me to a truly excellent burrito for dinner that night. 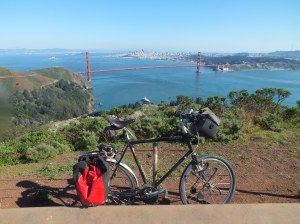 The next night I managed a healthy five hours of sleep, but I woke up refreshed and energised for a bike tour of the city. I cycled across the Golden Gate Bridge and got to the top of Hawk Hill, from where I had a wide view of the bridge and the city beyond. I took Dora to the beach and ceremoniously wet her wheels in the Pacific Ocean before we start the crossing to the Atlantic and the day finished with a highly successful dumpster diving session, which I’ll tell you more about soon.

When the weekend rolled round I got to meet the other residents of the warehouse and a few of their friends. It was movie night, we watched Birdman (good movie) and finished by throwing sticks at each other at two in the morning, playing a game called Kubb.

On Saturday I spent most of the day servicing Dora and replacing a few parts with the help of the volunteers at The Bike Kitchen, a not-for-profit, volunteer based community bike shop project not far from Dogpatch. I’m going to give these guys their own post soon, they were amazing. Dora now has shiny new, second hand, pedals and a brand new headset which was kindly given to me by one of the volunteers. This was particularly good of him, as it was getting harder and harder to cycle in a straight line. The best thing about all these repairs is that I did them myself, with the tools in the workshop and the support of the guys (and girls) who give their time to help there. Before leaving I was also given a new helmet by one of the volunuteers, as I’d lost mine in Thailand. It’s identical to the one my dad gave me before I left, so hopefully he won’t notice. More on The Bike Kitchen soon. 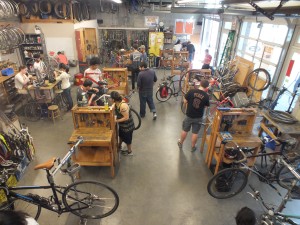 Sunday was incredible. I was invited along to something called Desert Hearts. I didn’t know what to expect, but I was greeted in the morning by one of the girls in a flowery feathered top hat and a man, bare cheated but for a waistcoat, with a six foot long staff topped with purple fur and light-up hearts. I slipped into my hippy clothes from Pai, in Thailand and went with them to a brunch which will have a big impact on all my future brunches. 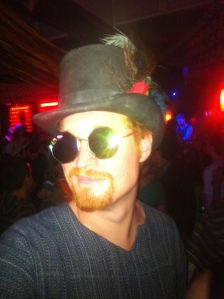 Desert Hearts too, was something else. An intimate space filled with electronic dance music from midday to midnight, populated with a mix of people who, in their strange, elaborate and often revealing outfits, looked like denizens of a futuristic tribal desert land. It wasn’t what I had expected to find in the middle of San Francisco. When we got back around midnight it felt like 4am, I had no trouble sleeping that night. 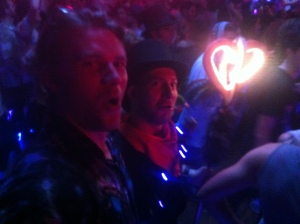 Then suddenly it was time to leave. My two night visit had stretched into a wonderful week. I love this city. Skateboard and scooters almost outnumber the bikes and the residents of the warehouse showed mewondrously whacky side of the place.

If you’ve gotten this far then you probably read that I’ve been doing a little dumpster diving recently, this is because I’ve pretty much run out of money. If you would like to help me out and buy me a meal then please go to http://tw.gofund.me/nsuybo where you can donate.

One thought on “San Francisco has only one drawback – ’tis hard to leave.”