My wallpaper is horrible. I mean really horrible. The kind of horrible that makes you wonder how any sane person could go into a shop, choose it and go through the lengthy process of sticking it to the wall without thinking for a second ‘oh wait, this makes me want to vomit’. It’s a kind of skin disease pink embossed with flower pattern bonnet hats and sentences in French that translate to ‘when I’m in your arms’. I have to see this wallpaper every morning and every morning I find myself hating it even more.

This wasn’t really a problem until a month ago when I convinced myself to lie down on a table in a strange room and let a man vaporise my eyeballs with a big laser.

I had decided a few months ago to have the surgery and I’ve written all about the consultation and eye tests here. Now the date of my surgery had arrived and I was sitting in the Dream Eye Centre waiting area in Myeong-dong, Seoul. Josh had kindly come with me. I sat there trying to look calm and collected and not at all like I wanted to wet myself and run away. I considered this option but the only way out of the clinic was via a lift that was set two wait 4 floors below, at the entrance, and would take about 30 seconds to get up to me. More than enough time for one of the lovely receptionists to ask if I was okay, and to notice the small pool at my feet.

So I had no choice but to follow the smiling woman who led me first to get my eyesight tested, then checked again and finally checked a last time by a doctor. Then it was up one last flight of stairs, up to the sixth and final floor. Josh had been invited to come and watch from outside the glass walled operating room.

I first put on a hair cover and a hospital style gown over my clothes, then I was taken into a room where I was given eye drops (the first of many) and my face was sterilised with iodine, which made it feel tight and itchy. Then I had a few more eye drops to numb my eyes (a strange feeling) and I was taken into the operating room. A nurse popped back outside a moment later to tell Josh to turn the flash of his camera, just in time. 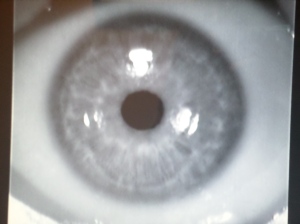 By is point I was actually scared, so it was nice to be offered a large cuddly toy which looked a little like Mr Bump, from the Mr Men. I shelved the last of the manliness I was pretending to have and held it close. Lying on the table, it was time to begin.

First, a cover was put over me and my head was positioned under the laser unit. More eyedrops. Most of the first ten minutes I was just lying on the table as three or four nurses moved around me. A short time later the doctor came into the room.

The surgery took less than five minutes. The doctor, now standing above me, opened my left eye and inserted a small spreader, clicking it until my eye was fully open. Then he applied a few more eye drops and took my head in his hands.

A small light, bright and circular, was directly above me. I stared at it. I don’t think I’ve ever stared at anything harder in my life. I didn’t even think about what would happen if I moved my eye. Actually, that’s a lie. I hadn’t though about the dangers for the weeks leading up to my surgery. Now, lying on the table, ‘what if’s’ filled my mind.

There was the sound of machinery and a rapid clicking sound. The green light began to spread, getting less defined, like I was seeing it through more and more water. At the same time the smell of burning stung my nostrils. A smell I recognise as burning flesh. My eyeball was being atomised. The top 120 microns being blasted into their component molecules. Mr Bump wasn’t having a much better time being crushed against my chest.

The nurse counted down from 30 in Korean and as soon it started it was over. One down, one to go.

The machine moved over to my right eye and the process was repeated. After each eye was lasered it was washed and a small sponge was put in place to absorb, well, I’m not sure what it was absorbing to be honest, eye bits I guess. Then a protective lens was put in and of course a few more eyedrops.

After just five minutes it was all over. The calming classical music that had been playing turned to a cover of Cliff Richards ‘Congratulations’ and Mr Bump had a dance, clearly overjoyed that I would be made to let go of him and free him from further torture.

My eyesight was good as I was taken to have my face cleaned and then to a recovery room, where I had to keep my eyes closed for twenty minutes. Josh kept me entertained with a running commentary as he searched the rooms various cupboards and drawers. I had a final eye test and was given a goodie bag containing a prescription and some sexy sleeping goggles. Before I left I asked when the pain would start.

As I left I put on the sunglasses I’m going to have to wear for the next 3 months. We grabbed my prescription and some food and then started to head home. A little sensation and a slight headache was starting, but I had expected to be completely blind after the surgery, requiring Josh to be my eyes. As it was I was fine until we were almost home. I was applying drops every few minutes but my eyes were starting to hurt and my head was starting to pound. I got home, turned off the lights and started an audiobook.

That night was probably one of the worst of my life. Which sounds dramatic until I tell you I haven’t had that many bad ones. Appendicitis was petty bad, but this was worse.

Imagine you have something in your eye and you want to remove it, but all you have is a red hot piece of metal. My eyes were streaming all night, itchy and inflamed. My room was also boiling and every drop of sweat off my forehead seemed to run into my eyes. I tried everything but couldn’t take my mind off the pain. Eventually I fell asleep till morning.

By Saturday the pain had turned to irritation. By Sunday the pain was gone, I even managed to teach some English that afternoon. Overall, I have to say that the recovery wasn’t that bad. One night of pain seems a very small price to pay for perfect vision, and I do it again in a heartbeat. Sorry if I scared you off a little. I made a point to do zero research before my surgery. I just figured everything would be fine.

Over the next week my vision varied from very good to pretty bad, but it never affected my work. At my one week check-up they told me I had 20/28 vision. 20/20 is considered normal and I’m hoping my vision will be better than 20/20 when all the healing is finished in about 6 months. At my one month check up earlier this week I had 20/20 vision. Yay!

So what do I think about eye surgery?

Would I recommend LASEK to others?

Yes! It’s still early days for my eyes and my vision is great, almost perfect. I no longer have to dislike the way my glasses sit lopsided on my face. I no longer have to mess around with contacts every morning and remember to take them out every night. And the post-surgery requirements; three months of sunglasses in daylight, one month of vitamin C and six months of eyedrops four times a day, don’t seem significant when my eyes work as well as they now do. I’m very happy with the surgery.

I only wish I didn’t have to see my horrible, horrible wallpaper.

Surgery: All Laser LASEK with Wavefront

Post-op care – Up to 6 months (eyedrops)